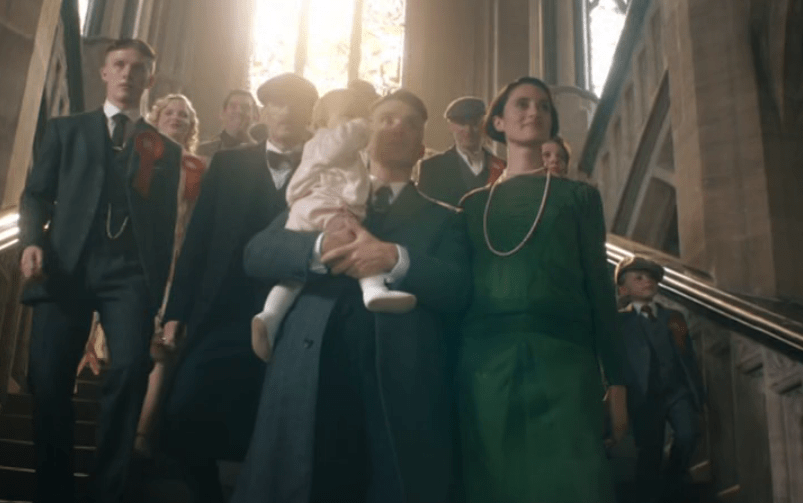 “In the bleak midwinter”, when December provides a dire month of Television, one show that has seemed to capture and engross both audiences and critics is the latest season of BBC’s Peaky Blinders. The show’s last episode has aired tonight (Wednesday 20th December) and the chaotic scenes and emotional moments that were expected did indeed unfold-and it was (quite literally) bloody excellent.

Before I delve on the Finale, I feel that it may be best to recap on what has been happening in Small Heath this Season.

We are re-introduced to a Tommy Shelby isolated from the rest of the Shelby Family. Despite the sense of distrust and anger between them all, the Family find themselves reunited following brother John’s murder at the hands of Luca Changretta (played to a tee by Adrien Brody) and the Italian Mafia. The series then follows the War of ‘Vendetta’ between Tommy and Luca, whilst Tommy deals with Workers’ Strikes, a pregnant Lizzie Stark, and his own struggles for power and trust in his circles.

Before the Finale began, I was speaking to a friend about what could possibly happen. BBC 2 had marketed the episode with the Biblical quote “An Eye for an Eye”. So, we could guess that Birmingham’s Funeral Parlours would soon have some work. And yet, not one viewer could have predicted what would occur in 60 minutes of action, drama, and twists: lots and lots of twists. M.Night Shyamalan would be proud.

The episode opens with Tommy and Alfie speaking to one another before Bonnie Gold’s boxing match against Goliath. Alfie may have been a less prominent character in comparison to what he was in Season 2, yet this episode reminds viewers that out of all the main cast members outside of the Shelby clan, that Tom Hardy is undoubtedly the most charismatic and engaging actor on the show.

Following on from this conversation and the boxing match that follows from this, the first twist in the ever-curving road to the end is met: suspicious of Goliath’s ‘seconds’ that see to him during the match, Arthur (still grief-stricken and in a state of paranoia and disillusion from the very end of Season 3) finds himself in a struggle with one of Changretta’s henchman. From what we have seen Arthur go through, surely this would just be another exhibition of the lunacy and melodramatic violence that is all too expected of Arthur Shelby. And yet…no, that doesn’t happen. Arthur is left bloodied, beaten, and supposedly dead by the silent assassin. Arguments can be made that Finn’s death at the climax of Episode 1 was heartwrenching, yet here, even the most callous and cold of hearts feel a wave of sadness hit. A brutal and violent end for a character seeking peace and an end to the War that had engulfed his life. The lack of words heard in the following moments captures the viewers’ thoughts exactly; stunned, shocked, in a state of disbelief. That surely must not have happened?

The rest of the episode unfolds in a manner similar to Episode 2 following Finn’s death; the funeral pyre is lit, and the sombre, melancholic tone is felt in Small Heath. Tommy, Polly, and Finn are the only true Peaky Blinders left, and it appears that Changretta has won the War. Seeking a compromise and an end to the bloodshed, the Italians and the  Shelby’s meet in Tommy’s Gin brewery to negotiate terms of surrender. I myself believed I had sussed out what was going to happen. Yet Cillian Murphy’s masterful acting as a defeated and inferior Tommy still implies viewers’ worst fears. Each season has ended with some sort of triumph for Tommy: Season 1 saw the death of Billy Kimber and the Shelbys being established as the top dogs in Birmingham. Season 2 saw the death of Campbell and Tommy defy the odds to survive once again. And in Season 3, Charlie is rescued, Michael killing Father Hughes, and revenge for Wife Grace’s death left the Shelby Family Patriarch at his most powerful. Yet no such victory is expected here. Time and Death have both finally caught up with the elusive, lucky Thomas Shelby.

But of course, “Big fucks Small”, and all is never as it seems with Thomas Shelby’s plans. Arthur waltzes into the brewery in a moment that can only be described as akin to the Second Coming of Jesus. I’m sure that Birmingham’s cuisine is different to Italy’s, and this is true when Arthur serves Changretta the cold dish of Revenge. Whilst it is fair to say that Brody was underwhelming this season, he has provided Peaky Blinders with one of its most dangerous and despised characters, regardless of whether or not it Luca Changretta was made after creator Steven Knight happened to have watched the Godfather and Scarface a bit too much.

I mentioned previously that every season of Peaky Blinders seems to end with Tommy emerging victorious after a series of mistakes and problems coming in the way of his plans. And Episode 6 just so happens to continue this trend. Thomas Shelby OBE MP. Besides being a bit of a mouthful, the ending of the Season does not seem fitting for any character besides Tommy. No mention is brought of what the future holds for Arthur and Linda, or Polly and Michael. Hero of the Working Class Jessie Eden is left betrayed and a shadow of her confident and proud self in the closing moments of the episode. Perhaps my one true qualm of the Series is that everything revolved around Tommy (it’s not a problem, Cillian Murphy anchors the show to perfection-something that will persist following Tom Hardy’s departure), whilst characters like Aberama Gold and Audrey Changretta are merely minor characters who only exist to move the plot forward. But ultimately, the departure of Brody and Hardy will allow Gillen, in particular, to ascend from his position of a criminally underused to a potentially main antagonist. A truly exciting prospect for those who know what he was capable of as Littlefinger in Game of Thrones.

Peaky Blinders won’t return to our screens until at least 2019 according to the BBC. But if the show continues the upward trend and delivers once again, then who are we to complain about this period of time? I feel that it’s fitting to finish with a quote by Alfie Solomons, in that the latest season of Peaky Blinders was “it was fucking biblical mate”.